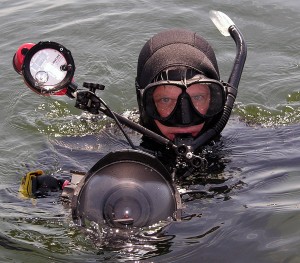 About Mike Laptew, the Diving Fisherman

Laptew has been diving for over half a century, and fishing since shortly after his first steps. A one-time competitive spearfisherman, he lay down his gun 21 years ago, and has shot fish exclusively with a camera over the intervening two-plus decades. He admits how lucky he’s been to shape a career around his driving passion.

Mike’s footage may be found in the International Game Fishing Association (IGFA) Museum in Dania Beach, FL, as well as at aquariums and universities nationwide. Laptew has contributed underwater footage of sailfish, striped bass, fluke, bluefish, and roosterfish—among many other key gamefish—to such televised programs as National Geographic’s Wild Chronicles and Strange Days on Planet Earth; Days of a Sportsman, Saltwater Sportsman, Walker’s Cay Chronicles, Out There, Fishing New England, along with numerous documentaries and PBS productions. His writing and photography have been featured in an array of national and regional fishing magazines including Field & Stream, Saltwater Sportsman, Gray’s Sporting Journal, The Redbone Journal, On The Water, Offshore/ Northeast Boating, Center Console Angler and The Fisherman Magazine.

As an active member of the Recreational Fishing Alliance’s (RFA) advisory board, and through extensive work with Save The Bay in his home waters of Rhode Island, Laptew considers himself a committed conservationist on a lifelong mission to at once safeguard our oceans and their precious resources, and preserve fair human access to healthy fish stocks.

In each of his DVD productions, Mike delivers you the unparalleled advantage of observing—and knowing—how fish behave under ever-changing conditions. Through a compelling combination of illuminating underwater footage and topside perspective on the methods employed by the best fishermen in the game, the Diving Fisherman gives you the insight you’ll need to land the fish of your career.

Consider bookmarking this site or adding it to your favorites. Mike will be adding all kinds of compelling content as the weeks, months and years unfold: Among these updates, look for photo essays featuring tips and techniques, video clips, and frequent blog entries on all aspects of fishing at the highest level—both here in home waters and around the globe.

Continuing a decades-old tradition, Laptew will be conducting frequent seminars locally and nationally, and values these opportunities to communicate face-to-face with avid anglers of all ages and ability levels. Keep an eye on the frequently updated seminar schedule for a show in your area..