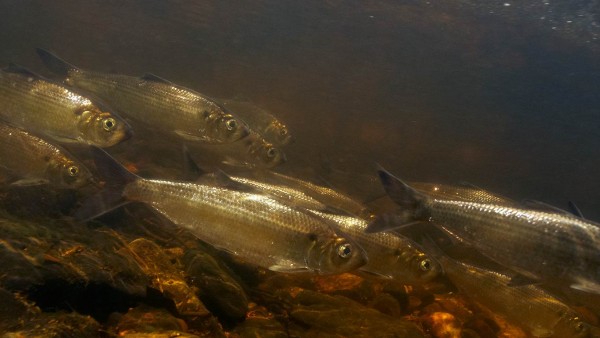 River herring returning to the river of their birth

Native Americans depended on these migrating fish as a source of food and then for centuries it was the European settlers. The alewife (Alosa pseudoharengus) has many common names – branch, blear-eyed, big-eyed, wall-eyed, freshwater, glut, gray, or spring herring; the golden or green shad; the bang, ellwife, gaspereau, grayback, kiak, kiack, kyak, mulhaden, racer, sawbelly, seth, skipjack, and spreau. The fact that it has so many names attests to its importance to people along the Atlantic coast from South Carolina to Newfoundland. Seabirds such as gulls, herons, hawks and cormorants as well as larger fish, especially striped bass and bluefish, also forage aggressively on alewives.

The alewife is difficult to distinguish from its close relative the blueback herring (Alosa aestivalis) when sighted in the water. The alewife, however, arrives earlier in the spring and migrates much further up river to breed in headwater ponds while the bluebacks arrive later and breed in the river current.

They spend their adult lives at sea and return only to freshwater areas to spawn in the spring. Both alewife and blueback herring are silvery in color and have a series of scutes (modified scales that are spiny and keeled) along their belly;

Alewife spawn in rivers and tributaries from northeastern Newfoundland to South Carolina, but are most abundant in the mid-Atlantic and northeastern states. Blueback herring spawn from Nova Scotia to northern Florida, but are most numerous in warmer waters from Chesapeake Bay south. In the mid-Atlantic region, both alewife and blueback herring are found in Chesapeake Bay and in virtually all its’ tributaries. Alewife spawn from late February through April, whereas blueback herring spawn from late March through mid-May. Females from both species usually reach 100% maturity by age 5 and produce from 60,000 – 103,000 eggs, whereas males of both species generally mature at an earlier age (ages 3-4) and smaller size than females.

Alewife spawn in a diversity of habitats that includes large rivers, small streams, ponds, and large lakes over a wide range of substrates such as gravel, sand, detritus, and submerged vegetation. In areas where alewife and blueback herring co-exist, blueback herring will exhibit more of a variety in their spawning sites including shallow areas covered with vegetation, in ricefields, in swampy areas, and in small tributaries upstream from the tidal zone. Mature river herring broadcast their eggs and sperm simultaneously into the water and over the substrate. Immediately after spawning, adults migrate rapidly downstream. Juveniles will remain in freshwater nursery areas in spring and summer, feeding mainly on zooplankton. As water temperatures decline in the fall, most juveniles move downstream to more saline waters, eventually to the sea; however, some will remain in deeper waters of the Bay and its tributaries for their first winter. Little information is available on the life history of subadult and adult river herring after they emigrate to the sea as juveniles, and before they mature and return to freshwater to spawn. Various studies have determined that river herring are capable of migrating long distance (over 1200 miles) in ocean waters of the Atlantic seaboard, and that patterns of river herring migration may be similar to those of American shad.

An osprey or "fish hawk" plucks a herring from the creek

Adults overwinter at sea in the George’s Bank, Gulf of Maine or Nantucket Shoals. Alewives can live at least 10 years.

Maximum length of a river herring is approximately 15 inches.

Alewife and blueback herring, like other alosine species (American shad and hickory shad) lay down spawning marks on their scales so that the number of times an individual fish has spawned in its lifetime is recorded on it’s scale. Blueback herring (age 10) have been seen with as many as 5 and/or 6 spawning marks!

Despite the many thousands of eggs laid by spawning alewife, very few offspring actually survive. In some populations, as few as three young-of-the-year fish migrate downstream for each female that spawned.

Visit my Blog for updates on efforts to protect and preserve river herring.